NYT Opinion: Nothing Happens When Women are Raped in Nigeria 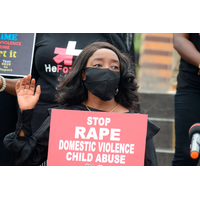 Photo: Ibijoke Sanwo-Olu, wife of the governor of Lagos State in Nigeria, at a Men Against Rape walk in June. Credit...Adekunle Ajayi/NurPhoto, via Getty Images

LAGOS, Nigeria — In May, hundreds of thousands of people around the world became familiar with the slight smile of a young student named Uwa Omozuwa. She was studying in a church, working toward a degree in microbiology, when she was violently raped. Within days, she had died from the brutal injuries inflicted by her attacker.

When Ms. Omozuwa’s death became public knowledge, the outrage was swift and sustained. Social media was awash with posters featuring her smiling face and the hashtag #JusticeForUwa. Talk-show hosts, newspapers and blogs focused on the case. People criticized the public response of the Redeemed Christian Church of God, in one of whose branches Ms. Omozuwa was assaulted. This was extremely unusual, since Nigerians rarely engage critically with anything relating to churches.

There was a consensus position: This kind of violence is unequivocally unacceptable. Nigerian women are fundamentally unsafe. Something has to be done about it.

Within weeks of the #JusticeForUwa campaign, another high-profile rape case entered the public domain. D’banj, a pioneering and much-loved star in Nigeria’s music industry, was accused by a young woman of breaking into her hotel room and raping her

Seyitan Babatayo made the allegations herself, on Twitter, posting pictures and details of how the assault had played out. According to her, D’banj made sexual advances through an assistant. After she refused, he somehow got a copy of her room key, let himself in during the night and raped her.

Unlike Ms. Omozuwa, Ms. Babatayo lived to tell her story. And this time the response was very different. Many — including a prominent human rights activist — cast aspersions on Ms. Babatayo and her perceptions of her experience. Her character was scrutinized (what was she doing in that hotel, anyway?), and her motives became the subject of heated speculation (clearly, she wanted some of D’banj’s fame and money). Her word alone was not enough; to believe her, Nigerians needed her body, too. But Ms. Babatayo had made the great mistake of surviving.

The hypocrisy was typical of Nigeria, a country organized around the lethal combination of a violently patriarchal culture and a puritanical relationship to sex. Here, men are actively socialized into the understanding that women exist to submit to them, meet their needs and confirm their masculinity through sexual availability. Men and boys are conditioned to exercise dominance. And the bodies of women and girls are their most ubiquitous training grounds.

Between January and May, more than 700 rape cases were reported in Nigeria. Given that rape, even when there is a robust social and judicial framework for addressing the crime, is generally underreported and sexual violence tends to be treated in Nigeria as a taboo or “family matter,” it’s safe to infer the true number is far higher. A corrupt police force only makes matters worse.

In the past five years, hundreds of women — including me — have used social media to make credible allegations about sexual violence perpetrated by actors, social media celebrities, lecturers, colleagues, politicians, musicians and pastors. We come forward online because on the internet, we have a better, even if still tiny, chance of being believed and supported. Most survivors who make these claims don’t go to the judicial system, because we know our society.

The truth is, the pain of women and girls — including the kind of pain caused by sexual violence — simply isn’t a big deal in Nigeria. If anything, generalized female pain is a fundamental aspect of our social order. The more abuse a woman is able to meekly accept, the more virtue she is accorded by the people around her. And those who speak out against abuse are put back in their place.

In 2019, for example, a photographer, Busola Dakolo, said that Biodun Fatoyinbo, pastor of a hugely popular prosperity-gospel church, raped her on two occasions about 20 years ago, when she was a minor. She was not the first woman to accuse Mr. Fatoyinbo of rape. The pastor stepped down temporarily, but was back in the pulpit within a month.

That’s the church. In the state, it’s much the same. In 2016, a male senator, Dino Melaye, threatened another senator, Remi Tinubu, with rape. “Nothing will happen!” he bragged. Not only were there no consequences for Mr. Melaye’s threat, a rally was organized in his defense — complete with branded T-shirts, banners and posters. He had spoken the truth: In Nigeria, nothing happens when women are raped.

Perhaps Ms. Babatayo knew that. Her allegations against D’banj were followed by a strange series of events. Her original tweets were deleted and promotional videos for D’banj’s music were posted to her Twitter account. She was arrested by the police and detained for two days. Eventually, after several days of intense scrutiny and upheaval, Ms. Babatayo put out a statement saying that she and D’banj had reached a mutually satisfying “non-monetary” settlement. “I just want my peace,” she said.

As a survivor myself, and one who has come forward publicly as well, I have some small idea of what Ms. Babatayo meant. It is excruciatingly unrewarding, for most of us, to raise our voices against the crushing weight of Nigeria’s culture of misogyny.

I always believed Ms. Babatayo. And I always will. When confronted with rape allegations such as those leveled against D’banj, we tend to ask, “Given the circumstances, why would this man rape someone?” But in Nigeria, the more productive question to ask is, “Why would he not?”

OluTimehin Adegbeye (@OhTimehin) is a writer and a columnist at The Correspondent.

The Times is committed to publishing a diversity of letters to the editor. We’d like to hear what you think about this or any of our articles. Here are some tips. And here’s our email: letters@nytimes.com.