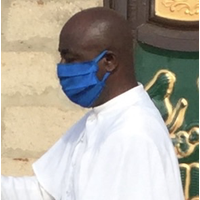 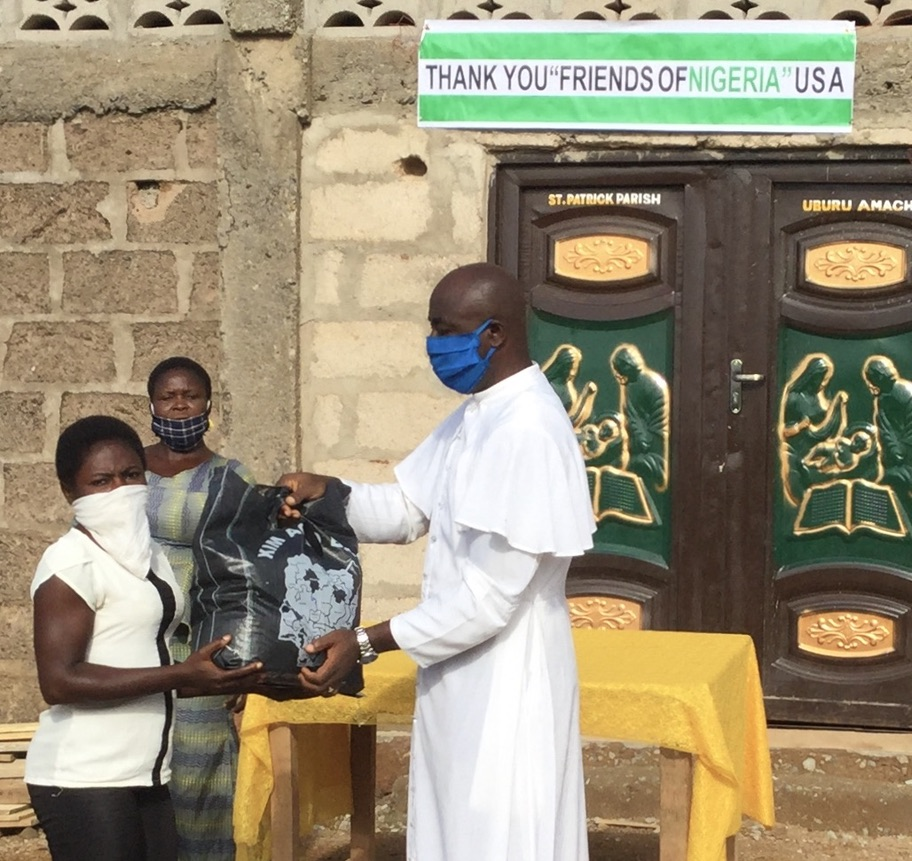 Fr. Edward Inyanwachi, a former FON Board member when he served on an overseas mission in San Francisco, helps distribute some of the $2,000 in Covid-19 food aid provided by Friends of Nigeria in early May at his St. Patrick Parish, Uburu Amachi, near Abakaliki in Ebonyi State in early May.

The following article is reprinted by permission of Catholic San Francisco, where it was published May 8 band written before food aid sponsored by FON had arrived. Fr. Edward served on the FON Board and helped organize the FON General Meeting held in  San Francisco in 13 years ago. He returned to the Abakliki area  in 2013 after receiving his doctorate in education and serving in several Bay Area Catholic parishes.

God willing, Father Edward Inyanwachi will soon again celebrate Mass for the members of his rural southeastern Nigerian parish. Until then he’s trying to keep them from starving.

The pastor of St. Patrick Parish and two mission churches in the Diocese of Abakaliki in Nigeria’s impoverished Ebonyi State served several Catholic parishes in the Archdiocese of San Francisco when he was a doctoral student here eight years ago, returning to his native parish in 2013.

Over the last two months, he has traveled in a truck over dirt roads outside the village to buy food staples that are out of reach — physically and financially — for some parish families amid the coronavirus pandemic.

“The cost of food items, especially the staple foods, is rising each day,” he shared in an April 24 email to longtime Holy Name of Jesus parishioner Angela Testani from the village of Uburu-Amachi.

Father Inyanwachi and Testani, a retired San Francisco nurse, met at the parish when the priest visited during his studies at the University of San Francisco. In 2016 they co-founded Mother of Mercy Charitable Foundation out of a mutual desire to improve the lives of the rural poor in Ebonyi, the third-poorest state in Nigeria.

In a May 12 email, the priest told Catholic San Francisco that he sees increasing “panic, anxiety and a sense of hopelessness” among the local people for whom communal practice of their faith at morning Mass at St. Patrick is the center of their lives.

“Usually when there is a disaster, the people are in church asking for the mercy of God,” said Father Inyanwachi. “But with COVID-19 that is not the case.”

Testani said in a May 7 phone call from her home in San Francisco that the pandemic has increased the hardship and already-heavy burden of poverty for villagers. Father Inyanwachi’s food assistance is sustaining the neediest families who were struggling with hunger long before the pandemic hit.

“When you can’t preach, you are living God’s word by works,” Testani said in a May 7 phone call with Catholic San Francisco.

The pair and the Bay Area donors who support their mission are making these works and others possible, such as improving access to medical care at a local Catholic hospital, drilling wells for safe drinking water and providing scholarships to local women who want to train as nurses.

“Father Ed,” as Testani calls him, included photos in his email dispatches from Abakaliki that showed volunteers separating bulk provisions into smaller bags for distribution. Recipients sat spaced a good distance from one another in a receiving area.

Over 120 village households have thus far received rice, beans, flour, seasoning cubes and soap to sustain them, he reported.

In mid-April, Nigerian President Muhammadu Buhari ordered a national lockdown to halt the spread of the coronavirus.

News reports recorded the reaction. Food delivery trucks were looted in Lagos, Nigeria’s largest city after the government promised the people food assistance that did not arrive. Gangs soon moved in to take advantage of the chaos by going house-to-house to rob people. Whole neighborhoods armed themselves with marchetes and home-made weapons to defend themselves.

“The situation here in Ebonyi State has not gotten bad as that of Lagos, but it is gradually simmering,” Father Inyanwachi said.

On March 24, Ebonyi State, like all of Nigeria's 36 states, closed its borders to prevent the spread of COVID-19, the disease caused by the coronavirus.

At that time the West African country reported 44 confirmed cases of COVID-19. That was less than a month after the first confirmed case was announced Feb. 27. Two months later, on May 11, the World Health Organization reported 4,399 positive cases and 143 deaths in Nigeria.

In a country with a population of almost 200 million people, those numbers seem to reflect relative success in Africa’s most populous country, though there is a growing hotspot in the city of Kano in northern Nigeria even as lockdown restrictions begin to lift.

Father Inyanwachi considers the village “blessed” without a single identified positive case of the virus.

“I say ‘an identified positive case’ because we have almost no testing going on, not only in the village but in the entire Ebonyi State,” he added.

As in other places around the world, Nigeria shows that efforts to contain the virus have compounded pre-existing problems that disproportionately impact the poor.

In Abakaliki, said Testani, the virus peaked at the end of the dry season when home larders of yams and cassava and other local crops are naturally in low supply. Many farmers had just planted their spring crops.

The border closure blocked farm trucks from nearby states from selling their products at the local open market, creating food shortages. The open market is the only affordable option for villagers who can buy or barter to supplement what they might grow themselves.

Shortages have led to price increases far outside the means of most villagers, said Father Inyanwachi.

“Only a few are able to make regular purchases now due to the high cost, and so many families eat only one meal a day,” he said.

“With them not having any clean water on any average day, we panicked,” she said.

Even those who might be able to afford to buy food at the open market could not gain entrance without washed hands.

Testani, who spent three weeks in Abakaliki in 2016, learned that a combination of poverty, poor nutrition, native superstitions and inadequate health care causes suffering, illness and an early death for villagers of all ages.

She said she believes the villagers are taking the virus restrictions “very seriously,” many of them having lived through the West African Ebola crisis that killed more than 11,000 people before it ended in 2016.

There have been some overdoses of anti-malarial medication, she said. In early April, President Donald Trump promoted the experimental use of hydroxychloroquine as a COVID-19 treatment despite limited information on its efficacy and side effects. A New York hospital study found no significant difference in death rates between patients who received the drug and those who did not, according to a Journal of the American Medical Association article published May 11.

Father Inyanwachi said that morning Mass is a “very important part of our lives here." For many villagers, being away from Mass has been the greatest difficulty.

“Some of them come and hang out outside the church while I celebrate Mass inside,” he said.

Reprinted by permission of Catholic San Francisco, May 8, 2020