Nigeria 27 currently has no planned reunions. Anyone reading this from Nigeria 27, how about it? Set up a ZOOM reunion in 2022! It is easy. FON can help by sending out emails to those veterans that NPCA has addresses for, just ask.

Following a Nigeria 27 Zoom gathering on January 17, 2021, Alan Robinson was inspired to write the following letter to Glenn Blumhorst, President of the National Peace Corps Association, and a long-time personal friend:

I know you’re a busy guy but I thought it might provide a moment of diversion and maybe even a little inspiration to hear about our recent Zoom Reunion of 19 of us from Nigeria 27 (1966-68).

Peter Hansen, who has done yeoman service founding and working with the Friends of Nigeria group for decades, and I co-hosted the first N27 Zoom Reunion January 17th.  Several N27 reunions have earlier transpired, usually in conjunction with PC Connect gatherings, but this was our first shot at a virtual one. Here’s a screenshot I doctored up to set the scene: 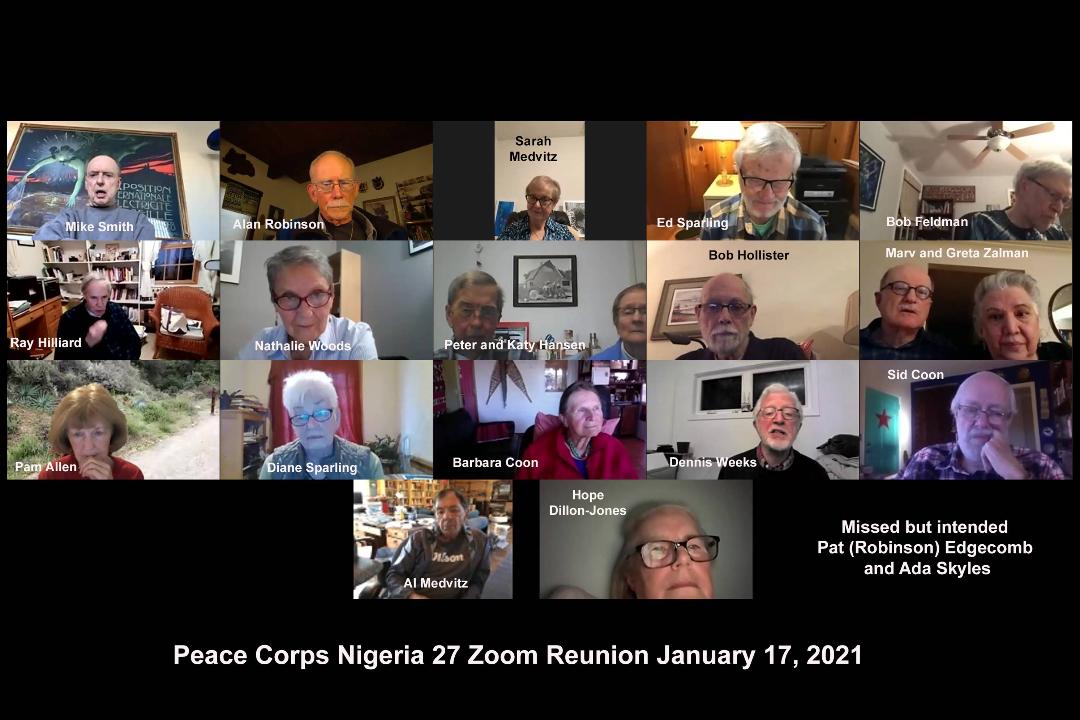 The mechanics of a Zoom Reunion with nearly 20 participants posed some challenges but actually it went smoothly for over 2 hours – we “allocated” a few minutes to each of us (with a timekeeper) to review what we’d done in Nigeria and a whirlwind tour of career choices and paths over the 55 or so years since COS. And at the end there was time for extra anecdotes and general reflection.

There were accountings of returning to earn PhDs and beginning long full academic careers, some focused on international studies; several who had taught law at Nigerian universities went on to distinguished law practices and teaching, with emphasis on civil rights or workplace equality; some shifted earlier career plans into nursing or public health and have made important contributions in international disease control and monitoring; others joined the Foreign Service or USAID, in some cases returning with those agencies or NGOs for long residential projects in Nigeria or other African or diverse locales; others traveled and volunteered extensively outside the US. And there was one exemplary lady who gave up teaching French to begin a 35 year career as a midwife, after doing women’s health work in her PC country (of Sierra Leone since she and her husband completed service there after she and many of our group had to be evacuated and reassigned due to the Biafran War).

So frankly it came as no surprise to any of us when I posed a redundant question at the end – do you think Peace Corps Service had much of an impact on your future career choices, your lives’ trajectories or worldviews?  – all 19 hands shot up and new stories popped out.  A sidebar after that was many of us harkened back to a special day in our Boston/Roxbury training when our innovative Roger Landrum-inspired  instructor presented each of us with a heavily laden physical toolbox. He then proceeded to teach us how to use the diversity of tools therein.  Almost all of us remember how we did just that during our Nigeria service, and admitted those simple skills followed us back home. But what occurred to me later is that the physical tool box is an apt and vital metaphor that Peace Corps Service itself provided us with a toolbox of skills and experiences that we refined and applied then and that we have continued to apply for more than half a century. That I suggest would give considerable satisfaction to Sargent Shriver (who signed my first PC invitation!) and others including Bill Moyers (who I think might have been deputy during our N27 service).

I’m sure you and your NPCA colleagues are fully aware of this fundamental affirmation of the value of the Third Goal, but I thought it might be a nice boost to see it played out amongst a cohort of some of the very oldest of RPCVs still around.

I wish you and your fine NPCA staff the very best in 2021 and beyond. I sincerely appreciate your efforts on behalf of  Volunteers who had to be repatriated and your dedication to advising and encouraging PC management on reopening country programs and returning Volunteers to the field when it can be done safely for all concerned. I can think of few other US initiatives that will have more impact – in a non-political way –  on highlighting the best values we as a nation hold.